Other Greek and Greek-speaking polyphonies

The Epirotic Polyphonic Song is the most widespread genre of folk polyphony in Greece. In the Greek region other genres of polyphony are also found, having a much more limited diffusion. In particular, we encounter polyphonic singing in the following areas:

Volakas is a village belonging to the Municipality of Drama, at the base of Falakro mountain, next to the borders with Bulgaria. The village’s women sing in two voices, with the second voice either singing homophonically with the first one, or singing the “ison” at the tonic, subtonic or third. Ethnomusicologist Samuel Baud Bovy refers to analogies and common characteristics between two-voice songs of Volakas and those of Nestos (Mesta) River valley at the Bulgarian side. A considerable number of women from different generations sing today in Volakas. The songs have a distinguished place in the village’s customs. Sometimes the song is accompanied by a bagpipe (“gaida”) and a percussion instrument (“dachares”). The older women sometimes sing in the old, “local” dialect. 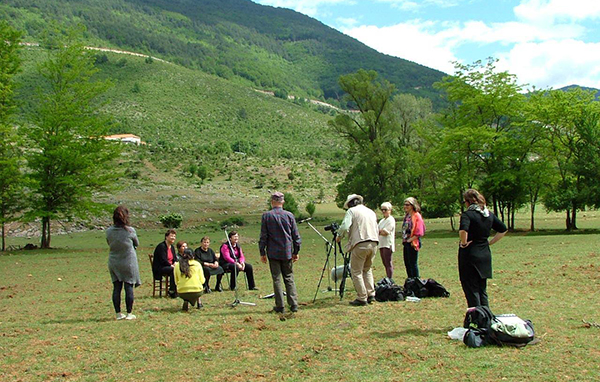 From a field-based recording by the Polyphonic Caravan at Volakas, Drama (2017)

Kato Garouna village is situated in Central-western Corfu and preserves a polyphonic idiom that is also found in other villages at a limited scale. It is about a four-voices folk polyphony, with the voices distinguished in “prima”, “secondo”, “bassa” and “soultana”. The songs are interpreted exclusively by either female or male groups and their themes concern everyday life, with a special focus on songs of work. Elements borrowed by the urban folk tradition of Eptanesian “cantata” are also integrated in the interpretation. The polyphonic group “Androniki”, having taken its name after the last “soultana”, Androniki Paschali, a person of reference for the village’s polyphonic song, is the one taking action today in the village. 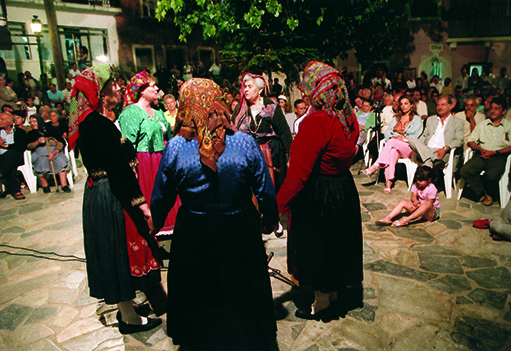 The Vlach-speaking residents of Greece, as well as those of neighboring countries, have their own polyphonic songs. The difference in their origin, the two big “currents” of Gramoustian and Fraserian Vlachs have their equivalents in the polyphonic song. The first have origins from the Grammos region and are currently referred to as Armani or Vlachs of Pindos. The Fraserians took their name from Fraseri region in contemporary Southern Albania and are often called Arvanitovlachs as well. The Fraserian polyphony is mainly constituted of three voices and is more widespread nowadays than the Gramoustian one, which has its own, more “vertical” musical structure. The seasonal movements for many of the Vlachs of the Greek region have favored the dissemination and osmoses of their way of singing. In generak, the Vlach polyphony is the second most widespread polyphony in the Greek region after the Epirotic Polyphonic Song. In the villages of Greek-speaking Apulia, in the region also known as Grecia Salentina, one encounters songs with three sematic rhythm and in stornello form, with an interchange of singing between the solist singer, the second singer responding and the choir. This form used to be very popular among the region’s songs of work, but also more generally among songs that were sang during work time (even lullabies with two alternating women voices). These songs are found nowadays in numerous villages of Salento area and are further spread and interpreted as covers by music groups in Italy and Greece who deal with Griko songs.