The point in time when the Polyphonic Song of Epirus originated is implied by its scale, its vocal, group, rhetorical character and themes. Researchers who have studied the genre, especially in Greece and Albania, tried to make up for the lack of sufficient documentation for determining its age. Papers by Antonis Lavdas and Spyros Peristeris were the precursors, with the later work by Samuel Baud-Bovy, Lampros Liavas and others being of great importance, while the most recent epitome of relevant research is the book “The Polyphonic Song of Epiros” by Kostas Lolis. In this latter work, one comes across interesting scientific theories and hypotheses on the uncertain beginnings of the genre, its origin, but also the age of its roles, such as, for example, that “in the depths of time, the polyphonic song begins without levelling (i.e. holding the ison, a drone note). The audio evidence provided by the early recordings of the genre (1928 Grapsiotes, 1935 Glyniotes), compared to later recordings, offer valuable material for the study of the contemporary evolution of the genre, highlighting, amongst others, the appearance of the more recent role (richtes).

Personal testimonials regarding an element that has survived for many years under conditions of geographical and social marginalization, like a song of impassable borders and rugged hinterland, provide valuable material. From the live testimonials, we may presume that polyphonic singing was formerly more widespread in Epirus. The dames of Ano Deropolis share childhood memories of their mothers nurturing them during harvest, singing polyphonally, and these blend with the narratives of women from Parakalamos of Ioannina, who mention polyphonic songs, primarily as songs of work in groups – mainly women’s – apart, of course, from the songs of life and rites cycles. This generation’s narratives make mention of a different past. “In days of old, the ravines and the slopes around the fields resonated with song. Now, nothing resonates any longer. Even the birds have flown! Only the river can still be heard as of old.”(Socratis Tsiavos, Ktismata, A.P.T )

The generation that fought in the civil war bears different memories of the same ravines. “In the lull between battles, we would pick up a song, a polyphony, that’s how we had been raised. I vividly remember starting a song on our side and it was picked up and continued by the rebels on the other side” (Giorgos Dotis, Dolo).

The fate of borderline Epirus after the civil war along the border from Grammos to “beyond Kalamas” in Thesprotia, is well known. The isolation of populations is the outcome of the gradual abandonment of the land, in flight to urban centres and emigration overseas. The continuity of the age chain is ruptured, as ages, in their prime, migrate. It is difficult for a genre which depends to such an extent on community, to survive. “You could not find anyone to hold the ison for you. In Germany, I would choose any engine that produced a noise and I would pick up the song. And I would sing with the engine as bass!” (Sokratis Tsavos, Ktismata). Years later, those who remained behind experienced the same. “There ’s no one in the village with whom I can sing. And when I have such a yearning, I take my car, drive it uphill, so the engine can keep the right ison for me and I start singing.”! (Giorgos Dotis, Dolo, Α.P.T.)

The “fate” of the Polyphonic Song of Epirus on the other side of the border has been quite different. The post-war regime of Albania, particularly through the organization of the Argyrokastro (Gjirokastër) Folklore Festival, offers a stage for promotion, at the same time forming a field of intervention for the polyphonic groups. The formation and operation of groups, the composition, their repertoire, the manner of interpretation, fall under the jurisdiction of regional and local regime officials. New songs are expected to praise the “achievements” of the regime, to promote its policy, to specialize it in the field of culture. Another, external hierarchy and discipline is imposed.

At the same time, on the Greek side of the border, the map of survival for the polyphony of Epirus is gradually shrinking. Listening to polyphonic songs from the radio stations of Argyrokastro (Gjirokastër) and Tirana was the sole way to “bridge” the two sides of what, in those days, used to be impassable borders. “We would listen to songs on the radio, we would listen to the partis taking on the whole verse on his own at first, and then they would all repeat it together, with both the ison (level) and the gyrisma (turn) and we said, that’s how we ought to do it! That’s how others could also understand the words. We realized it when we started singing far from Epirus” (S. Tsiavos, Ktismata). 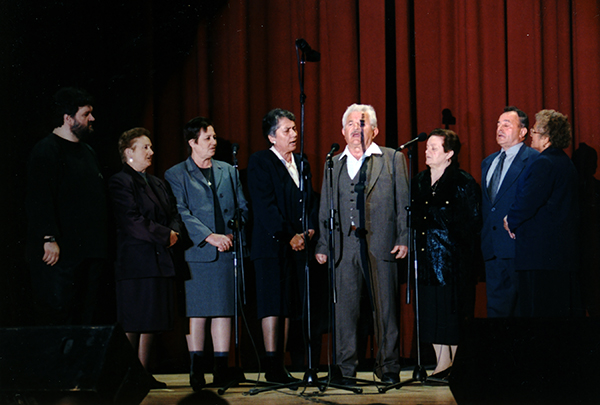 In the polyphonic groups of Ktismata at Pogoni, where the first local recordings were held by Simon Karas and Domna Samiou, the precursor of promotion of the polyphonic song of Epirus is recognized, far from its place of origin, with appearances in Athens and other cities, from 1968 to 1978. In 1984, the Polyphonic group of Ktismata is invited to Paris, where the «Chants Polyphoniques et Musique d’ Epire” are recorded and where the imprint of recent changes is clearly discernible, both in the manner of interpretation (introduction of the prologistes) and in the verses (“Klain’ oi perdikes sta plagia” (= the quails weep on the slopes) in lieu of the older “Klain’ oi petres ta litharia” (=the stones and the rocks mourn). Some years later a second recorded edition of Ktismata follows, entitled “Polyphonic of Epirus”. Meanwhile, the Greek-Albanian borders have opened, and the polyphonic song of “Northern Epirus” can be heard live in Greece, too (Megaron Mousikis – Athens Concert Hall, Zappeion); in 1994 a double vinyl record is published – an exceptional compilation of the groups of those times, entitled “Polyphonika Tragoudia Voreiou Epirou” (“Polyphonic Songs of Northern Epirus).

In 1993, seminars are held at the Museum of Greek Folk Musical Instruments ‘Foivos Anogeianakis”, with Vaggelis Kotsou of Ktismata being the first instructor. There, for the first time, young people not connected to Epirus by origin, are introduced to the polyphony of Epirus. In 1996, the polyphonic group “Chaonia” is formed, and in 1998, its leaders, Alexandros Lampridis and Antonis Exarchos establish the non-profit company “Apeiros”, publish a magazine of the same name, dedicated to the Polyphonic Song, and organize a “Meeting on the Polyphony of Epirus” at Polydroso in Thesprotia. In 1999 they take over the instruction in the seminars at the Museum of Folk Instruments, and ”Apeiros” establishes the International Festival of Polyphonic Song, and organizes the 1st International Meeting of Polyphonic Song in Pogoni and Filiates. With the support of a number of Local Authority bodies in borderline Epirus and, occasionally, of the Ministry of Culture, “Apeiros” continually expands the summer International Meetings in duration, theme and geographical location, spreading their reach all over borderline Epirus, Macedonia, Thessaly. Corfu, Albania, Bulgaria, Southern Italy. It is a multifaceted journey that includes concerts, seminars, local recordings, presentations, and workshops, creating a framework of encouragement for genuine performers, providing contact amongst groups of different peoples, languages, genres, regions and generations, attracting newer pioneers, and enriching the human landscape. The Big Concerts of Polyphonic Song organized by “Apeiros” every summer in Athens, provide crucial empowerment, thus broadly promoting the genre to new audiences. 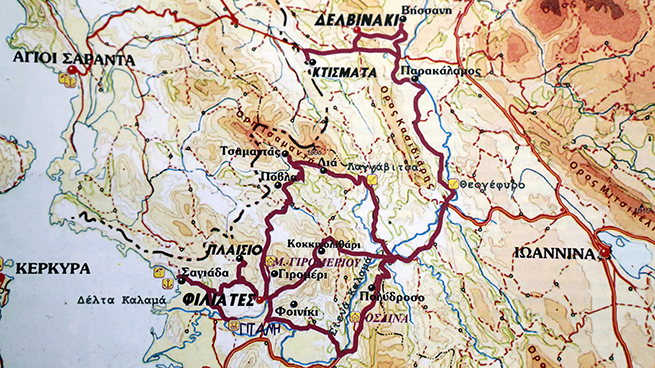 The close contact of groups from different regions, origins and paths, does not leave interpretation unaffected, which, frequently, escapes its local idiom, while its operation is frequently entrenched in the interpretative boundaries of a representational logic. On the other hand, this contact offers older participants the stimulus to preserve their song, to recover and share even more songs, to feel like members of another community beyond their own, in which interpreters, researchers and pioneers of folk polyphony meet, with no limits.

‘Apeiros” constantly remodels the nature of its activities, following a path which is cleared step by step. In 2003 they established the Archive of Polyphonic Song, which is constantly being enriched. The International Meetings are renamed Polyphonic Caravan, and travel for three seasons annually; the Big Concerts are renamed Big Celebrations, where newer groups proliferate and now outnumber the older ones, and the events framework makes way for participative festivals, in the same locations, in a constant rediscovery of locality, in the old and newer common sites of an evolving Community of Polyphony.

At the same time, the number of new groups and new entities, that organize seminars and events, keeps growing. In Athens, the “Polyphonic of Epirus” (V. Kotsou) is active over time, dynamically and in a variety of ways. In Ioannina, in 2003, “Inoros” is formed, a group with a distinctive course and published recordings. The activation of the bodies of Expatriates of Epirus is also critical, as they undertake initiatives, organizing seminars and events. The culmination of these dynamics has been the creation of a Laboratory for the Polyphonic Song of Epirus by the Panepirotic Confederation of Greece (Panepirotiki Synomospondia Elladas) (2012).

In Thessaloniki, two women’s polyphonic groups are formed – “Dioni” and “Pleiades” – with the participation of musicologists of this genre, promoting the genre through participation in concerts, theatrical performances and films. The polyphonic song is also included, through adaptations, in the repertoire of musical groups of other timbres in Greece (e.g. “VIC”), as well as vocal groups abroad (“KITKA” in California, “TRIO TZANE” in Paris). The genre’s journeys abroad, which began with Ktismata in Paris, continued with the groups “Pogoni”, Heimarra, “Polyphonic of Epirus”, “Chaonia”, “Inoros” etc.

At Ktismata, a “Centre of Polyphonic Song” is established, through the participation of the Municipalities of Delvinaki and Pogoni in European funding programmes. The independent published recording of newer polyphonic groups is enriched (“Inoros”. “Pleiades”, Aetopetra). There is constant activation in the area of expatriates from the Greek minorities of Albania, through a number of groups; the main milestones are the organization of “Northern Epirus Forum” at Zappeion (2006), the founding of the Northern Epirus Folklore Association “Chaones” (2013) and the formation of polyphonic groups through a number of societies. Over the past few years, the Polyphonic Song of Epirus has been in touch with the so-called “social spaces”, in self-managed cultural initiatives, as well as in solidarity concerts, youth organizations of political parties and antifascist festivals.

The record of the past few years, starting with the founding of the Polyphonic Caravan and the proliferation of all that followed, highlights the wealth and variety of initiatives in the field of the Polyphonic Song of Epirus, which contribute towards expanding the map of its nuclei in the urban environment, the growth of its audience and its variegated travel companions. The Polyphonic Song, from the confines, borderlines and spaces beyond the borders of maps and history, has entered cities, and Polyphony, overcoming its impending defeat by time and neglect, is attempting a new beginning, which allows us to be optimistic concerning its future, the more it is grounded on collective ethos and mentality, reinforcing its character of community in its new social environment. The Polyphonic Song concerns not only collective memory and the living expression of populations indigenously related to it, but also the collective expression of new collectives, thus forming an element of community. It is a limitless Community of Polyphony which increasingly concerns more and more performers, researchers and fellow travellers!

Through the initiative of the Polyphonic Caravan and the response of a series of other initiatives, the informal but living community of Polyphonic Song is already coming together for its next big landmark – the establishment of the International Day of Polyphonic Song which, starting in 2016, will be celebrated with locally self-organized events, every 14th of May, in a number of cities of Greece and other countries.